«Here are the strengths of the CoSMo study»: interview to Massimo Del Sette 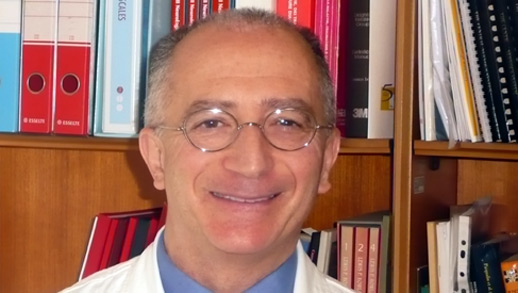 He is President of SINSEC (Italian Neurosonology and Cerebral Hemodynamics Society) and one of the three experts that conducted central reading of the examinations in CoSMo study. We met him just before the presentation of the results

What are the strengths that make CoSMo a turning point for the scientific community and for people with MS? Why was it necessary that the examinations were read and validated by three central experts that did not have them executed? How to be read in the results of the study and what legacy leaves CoSMo?

To learn more about the study sponsored and funded by the Italian MS Society (AISM) we met Professor Massimo Del Sette, President of SINSEC (Italian Neurosonology and Cerebral Hemodynamics Society). Member of the Steering Committee of the study, Del Sette was also one of those responsible for the formation of sonologists engaged in the study and one of the three central reader who analyzed the examination produced by 26 local sonologists.

Dr. Del Sette, you were one of the experts who read, totally in blind, the ecocolor Doppler examinations performed in the 35 Centres participating to the CoSMo study. Which is the strength point, and the added value of this choice?
«The strength point is the complete maintenance of a blind analysis, that is, the fact that, who wrote the final report on the presence or absence of CCSVI in the analysed patients, did not know to whom the examination referred to, if to a patient with MS, with other neuro-degenerative diseases, or to a healthy control. And this was a considerable step forward in the investigation on CCSVI: many of the limits in various previous studies, are due to the fact that, although well defined, designed and carried out, they inevitably loose their blindness. The ecocolor Doppler examination does not provide an automatic result. It is not like the examination for glycaemia, where you obtain a number which certifies with evidence a pathology range. This examination must be interpreted. And, among the variables which might affect its interpretation, we have the possible conditioning arising from the type of patient on which the examination is performed».

Did the interpretation of CoSMo's data really benefit from the centralised reading? Why?
«Yes. There existed an excess of ‘false positive’ detected at a local level, which did not find confirmation in the analysis by the central readers».

Why blindness was not completely possible at a local level?
«The protocol tried to grant the complete blindness of the local examination. For example, the patient was examined wearing a covering cloth, to avoid the evidence of injections. Probably, there were too many factors involved, which could not be kept completely under control. For example, it happened different times that, in the middle of the examination, there were patients asking to go to the toilets. The rule was that, in such cases, the examiner left the room before the patient, but it is evident that the same fact that the patient asked to go to the toilet, led to think he/she suffered from issues of urinary incontinence. Or, according to the protocol, the nurses had to enter the examination room and prepare the patient before the examiner entered. But, maybe, the patient arrived with the wheel-chair, and the examiner, while entering, could, in some cases, see the wheel-chair located somewhere».

Did the centralised reading analyse all of these images?
«We, the central readers, read both the basic examinations and those of the advanced protocol, deriving the useful information to achieve, even with greater appropriateness, to identify the presence of the necessary criteria to reach a diagnosis of CCSVI».

How much time, on average, served to analyse centrally each single examination?
«Let’s say it could last from twenty to 45 minutes per analysis. We also point out that each examination lasted between one and two hours as an average».

Once analysed, can we say that CoSMo examinations were performed correctly and homogenously in the different participating Centres? What guarantees this?
«That the examinations were performed correctly, is testified by the fact that, most of them have been considered valid, while only a small portion, 45 out of 1867, was rejected by the central readers, in most cases for formal non-compliance, like the unavailability of a key to annotations, or the impossibility to understand if, during the examination, the patient was standing or in supine position. Hence, above all, the good quality is documented by the abundance of information offered by each examination. It was necessary to study carefully and with accuracy all the amount of information output by the individual examiner. If there’s a defect, which is actually another of the COSMO strength points, is the redundancy of the information provided by each single examination. This means that the final report is defined on a really solid documental basis, which, moreover, remains in the database of the study, available for further analysis».

And what does this mean?
«It is still early to give out peremptory statements. Maybe it is the same definition of CCSVI which starts from assumptions that are not easy to reproduce, from rather aleatory assumptions, to the extent that, different expert sonologist, if placed in a situation of complete blindness in front of the same images and clips, may either see the presence of CCSVI or not».

Are there different examples where, whoever analyses an examination performed with ecocolor Doppler will see the seeked pathology unequivocally?
«Whoever uses the ecocolor Doppler is able to detect and measure with certainty the presence of stenosis of the carotid artery. These are the stenosis that may lead to an ischemic attack, or to a stroke. In the past, I myself took part to group-studies to define the criteria for diagnosis of carotid-stenosis. And, by the way, it took several years to define in a universally accepted and recognisable way, which cut off of blood speed in a given point, would indicate a given percentage of stenosis. Hence, the ecocolor Doppler technique is, per se, operator-dependent, even when you achieve an universally known, and reproducible definition of the symptom investigated».

In other words, is the ultrasound investigation effective or not to detect the certain presence of CCSVI?
«CoSMo was not designed with the purpose of validating the ecocolor Doppler technique, but to answer the question whether the CCSVI is associated to MS. Anyway, in order to have certainties concerning the validity of ultrasound examination to detect CCSVI, we should have also other answers. We should know if there is a gold standard, that is, an examination might detect the seeked data without relevant errors. In the mentioned case of stroke and carotid stenosis, there is angiography, which measures the diameter of a vessel in the point of stenosis, and then downstream and upstream. We do not have this gold standard in CCSVI yet. Venography, considered in average as the current gold standard, is subject to changes, since the venous system has modifications which can be induced by the examination itself. Finally, at the scientific level, it is not yet exactly clear what is being measured when you seek CCSVI, since the 5 criteria referred for its identification, are in some cases difficult to measure and reproduce».

How is CoSMo placed in the international investigation on CCSVI? Why is it a turning point?
«The most important result of CoSMo is to have demonstrated there is no relevant difference between the presence of CCSVI in patients with MS and in healthy controls, or in patients with other diseases. The turning point is: the CCSVI, as an entity associated to multiple sclerosis has no scientific citizenship. But the considerable amount of information gathered and categorised through COSMO, is sufficient to try and deepen the hypothesis of a venous pathology concomitant in a patient suffering from multiple sclerosis. A pathology- the venous- which does not coincide with CCSVI, but which could even be re-estimated and re-considered in the next future, maybe starting from the information which CoSMo has already made available and whose analysis are in progress.

If I am a patient suffering from MS, what shall I do now? CoSMo is an observational study, provides information, does not heal. But if I want to heal from MS, what answers do I find thanks to CoSMo?
«If a person suffering from MS also suffers from CCSVI, may remain calm: it is not necessary to heal CCSVI to heal from multiple sclerosis. CoSMo demonstrates, not only a low percentage of association between CCSVI and MS, but, increasingly, that there is no difference between who suffers from MS and a healthy subject or who suffers from other neuro-degenerative diseases. Exactly for this, we may avoid to heal the CCSVI to heal the MS».

But, you belong to the steering committee of the Brave Dreams study, which is in a stage of implementation exactly to verify the effectiveness and security of angioplasty to treat CCSVI in patients with MS. How to explain?
«As soon as the CoSMo data will be published, I will personally resign from the BRAVE DREAMS Scientific Committee, because I believe a study of intervention makes no sense where there are data demonstrating the lack of any association between multiple sclerosis and CCSVI».

But the study is under performance, will be performed, and patients are to undergo surgery even out of the Brave Dreams study.
«I personally do not know if, after these results, Brave Dreams is to be carried out. I believe that great campaigns at ministerial level will be required in order to prevent people from taking harmful choices».

Are people not free to do what they deem best for their own life?
«Freedom always comes first of all, and cannot be negotiated. But, in my opinion, in this specific case, people would not be free to undergo surgery in any event. Nobody shall risk getting damages on health without the opportunity of benefits. If even one person were convinced, wrongly, that the cause of his eye-tumour was an ingrown toenail, it should be helped to avoid operation to the toenail to heal the tumour, even though this would be a simple operation. However, either the person remains free to risk or not, I, as a physician, cannot passively accept such thing. The community of physicians should always object to the possibility that people undergo operations which risk to bring damages without benefits».

But how can you explain that many people say they are better after operation?
«This is a sensitive matter, which involves the freedom and hopes of who struggles hard everyday with his own disease. In these cases, it is not allowed to drawn judgements carelessly. Remaining respectfully within the bounds of science, we may point out that, in any scientific study to test new preparations, approximately the 20% of patients treated with placebo, that is, with an harmless matter of water and sugar, says to feel better after treatment. It also happens among those with severe disease. But this does not mean they are actually healing. To heal, the right treatment is required».